As practically the entire fanbase knows the 2018 Lunar New Year Event is now upon us, and with that comes the infuriating yet addicting game mode “Capture the Flag”. For players who were around for the Year of the Rooster, you likely recall the tireless struggle of jumping Winstons and boosting D.Vas gliding over the rooftops of the Lijiang Market; and the torture of trying to win at least one round,  so you could have a chance to nab that sleek Tracer or Mei skin.

Though for the past year the development team has been tactfully attempting to rework the game mode and have even introduced a new map just for the event, unfortunately, it has done little to solve the bitterness in players and the broken feeling. However salt has never stopped players from playing before, and with the addition of Competitive CTF this year, players seem to have even more to rage about.  Therefore, in an effort to help heal some of those salty wounds, we here at Miso have researched extensively and discovered some tips and tricks to help you get a fighting chance at winning some CTF. 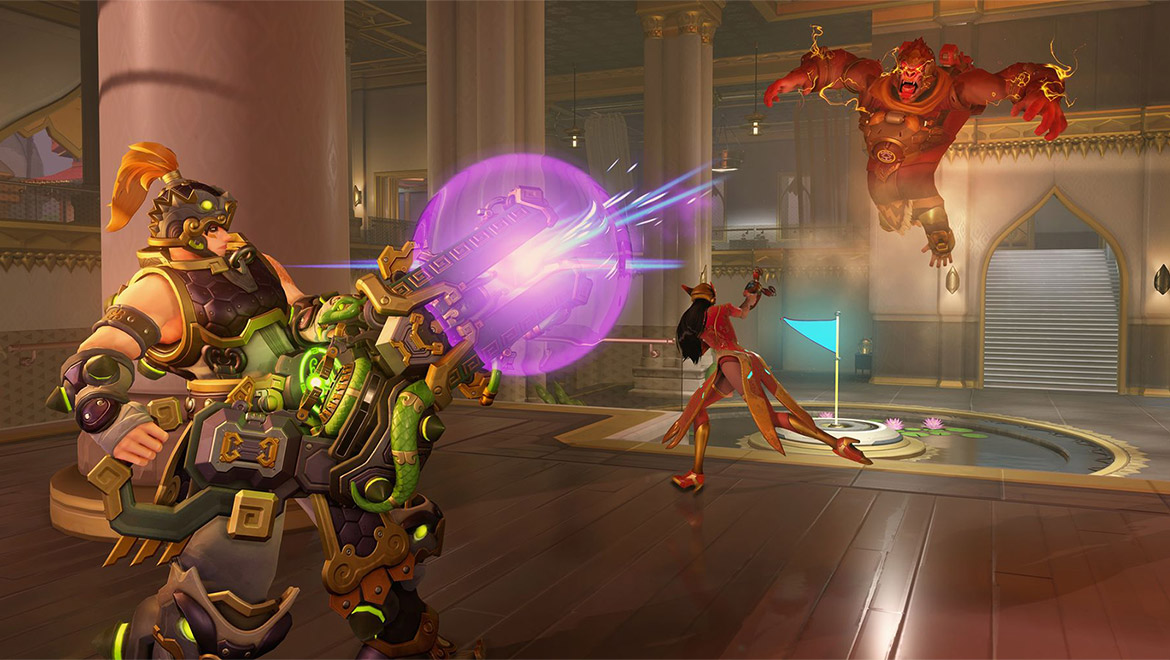 A key trick to help get your team on the right foot is to take out as much of the enemy team before advancing into their flag territory. Once the battlefield tilts in your favor, take advantage of that spawn time and head for the flag. As they see their numbers dwindle your opponent’s team will switch their priorities on defense, keeping your flag safe for the time being.

Regardless of whether you’re pushing with a Roadie-D.Va combo or got a squad of fierce DPS, sticking together is much better than going alone. Keeping close gives the enemy team little availability to attack your blindspots, as your teammates will be close enough to spot something in case their defense tries to stop you from taking their flag.

Trick 3: Characters who Break the Map, Best on Attack

This is particularly relevant for the new CTF map. On Ayutthaya, a PharMercy combo is absolutely OP as Pharah is able to fly around on the outskirts of the map, completely avoiding the center and side entrances if need be. Use the Rocket Queen to destroy any turrets and provide cover to teammates as they steal the flag.  In addition, despite certain abilities now programmed to cause players to drop the flag when used, passive abilities do not seem to be affected. In particular is Lucio’s wall riding ability. The DJ is able to dive in and take the flag, hopping and gliding away with his speed boost before the enemy team has a chance to catch up. Though it has just been reported that a patch is set to go live after Valentine’s Day that will nerf his wall riding in CTF, it is unsure as to whether it will make a big enough impact to Lucio’s viability in the game mode.

It’s a no-brainer that having a builder like Symmetra or Torb will help give needed protection to your flag, but in situations where communication is limited (i.e. no mics) or there is more focus by your team on offense than defense, a Junkrat can become a valuable asset. Not only is his trap a surefire way to enhance protection of your flag, but the damage of his grenade launcher can help finish off an enemy when a turret doesn’t do the trick.

If you’re going to take on the role of support make sure you focus solely on healing your team. Unless the upcoming nerf has some major impact, Lucio should be counted as DPS while playing CTF, so its best not to rely on him solely for healing. In choosing support consider the following: What is the level of communication on your team (Are you in a group with friends or are you alone rider?) If communication is solid, an on-healer is a good choice (i.e Ana and Mercy), however if communication is limited, choose an off-healer to allow for better protection (such as Moira and Zenyatta).

When playing support do your best to avoid the center of the action as much as possible and heal as best you can from afar. If pushing into enemy territory keep an eye on your back for flankers. If your team communication is not able to provide you some protection, look to secure your position in places when your back is protected (such as a corner or wall).  Remember, if the flag is dropped do not be the one to go after it. The role of the healer is critical and the last thing you need is to be spectating your teammates dying as you slowly wait to respond.

Tip 6: When in Doubt, Disperse

One of the issues that make CTF feel so broken is the variation in character speed. If a character like Lucio or Soldier takes your flag and your team can’t stop him before he’s out the door, the enemy team has pretty much won that round. In order to avoid the speed struggle, try to disperse a few teammates outside if the enemy team seems to be getting the upper-hand in taking your flag. This assures you have a better chance of stopping flag-steals regardless of speed.

Have any tips or tricks of your own you’d like to share? What are the biggest struggles you’ve faced in CTF? Let us know your thoughts in the comments below!