Reaper76 shippers rejoice! The news was revealed today in a surprise story arc written by lead Overwatch writer Michael Chu which covered the events following the Old Soldiers comic published in November of 2016. In the new story “Bastet” the reader follows from the viewpoint of Ana, narrating Soldier’s recovery in Necropolis (which has been a visible easter egg for some time in-game). During their discussion, Ana recalls a man named Vincent to whom Jack “held a candle for”. The interaction further implies a romantic relationship between the two men which ended due to the Omnic Crisis and Jack’s duties to Overwatch.

Sceptics have argued that the story does not confirm a romantic relationship between Vincent and Jack,  leaving Jack’s sexuality unclear. However, in response, Michael Chu tweeted out the following: 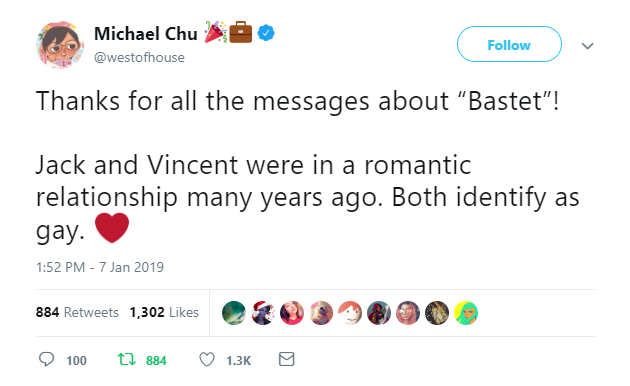 Thus social media went absolutely wild, making everyone’s favourite “dad” a global trending topic. However, not all were in support of the reveal. Opponents to the announcement have called it “forced” and “unnecessary”, implying that cannot or should not be gay. Yet it was discussed at the 2017 Blizzcon  Overwatch panel that they plan to make the game more inclusive and diverse and through character creation and lore.

This agenda is not something out of the blue. Upon exposing Tracer’s sexuality in the 2016 comic “Reflections,  the team noted that similar reveals were planned for in the near future. However, they never hinted at to which heroes.

Some fans have theorized that Soldier’s reveal was alluded in the same comic, as he is presented holding a picture similar to the one Ana holds in “Bastet”.

Soldier and the “Ellie” Effect

Despite the pro and anti-gay sentiments currently rocking the Overwatch boat, a third party now argues that the reveal is a ploy by the development team to cover up negative publicity drawn from the “Ellie” scandal.

For those unaware, in recent months a girl named Ellie shot to the 500 tier, gaining second-hand publicity from top tier streamers. She was then recruited by Overwatch Contender’s team Second Wind. When the announcement was made on Twitter, Overwatch’s ugly side reared its head, leaving Ellie brutally harassed. Male gamers claimed her to be fake, demanding proof of her skills. In response to threats, Ellie backed down from the opportunity. Later in the week, a theory was posted that “Ellie” was not an individual, but a collective of players attempting a social experiment.

Whether this theory is true, the horrendous attacks toward “Ellie” sparked anger among female and minority players. Such toxicity is frequently experienced by them. And despite the scandal’s publicity, Kaplan and his team have yet to condemn the toxicity nor acknowledge the incident. Therefore many LGBTQ+ identifying players think the reveal was done to sweep the Ellie scandal under the rug.

Controversy aside, the development team also revealed a new Ana skin. The “Bastet” skin pairs with Pharah’s “Asp” skin, reflecting Egyptian mythology. While Asp is the snake symbolic of Egyptian royalty, Bastet is a cat/lion goddess symbolic of protection. The goddess is also associated with the eye of Ra, which Ana has tattooed on her face.  Though a render of the skin was teased, a release date has not been set.

Want to hear more about the Ellie Scandal? Craving updates on lore? Subscribe to miso.moe and support us on Patreon!